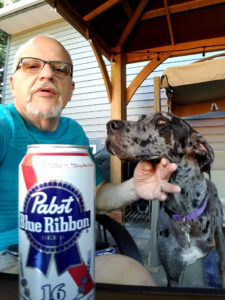 These days, I’m known as Grandpa.  Grandma and I got our first dog (Ebony, the Doberman) in 1977.  We’ve always had dogs – often more than one, and usually at least one cat, too.  One of our dog-loving friends, Wendy over on Vashon, posted on Facebook with a photo of a very striking-looking Great Dane.  Another friend posted a note to her spouse “Look, Jack, she’s a tripod!”  They’d lost Jack’s tripod Dane a couple years back, but had since visited us with their new Dane puppy – Vicky at 90lbs had a *wonderful* time with Brutus, our “granddog” (left behind by son…) Yellow Lab x St. Bernard, tearing all over the house and yard, zoomies!  Brutus apparently liked Danes. So I got on Facebook and chatted up Wendy and Jack, offering dibs, but they thought I should get first choice, so I got in touch with Sandee and NWGDR about this beauty.  Then named “Silver”, she is indeed a silvery-blue merle with a very amazing coloration. She’d apparentl come from a fairly well-known breeder, but escaped out the door at 4mos. old and got hit by a car, ending up in amputation of the left front leg at the shoulder.  Her former owners had split up and had family issues, so she was surrendered at age 18mos.  We filled out the
application (easy online), and Sandee checked our references and background and put us in touch with Angela who was fostering, and a visit was arranged promptly.  Angela delivered! 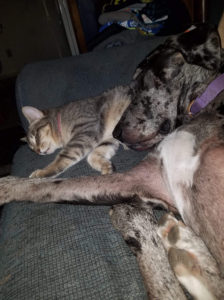 “Sliver” just walked in like one of the family.  With lots of careful but ultimately redundant supervision, she met our grandsons Preston (then 8) and Noah (then 4).  She was racing around out in the snow and playing with Brutus; rolling around on the floor with the boys, letting Noah snuggle up to her and seeming to enjoy it.  Sniffed the cat and didn’t freak out at being hissed-at and slapped.  “Sold” in 1.

Silver left with Angela, and it took a week or 10 days to get the decision finalized and the vet visit scheduled.  We decided to have the gastropexy done “while you’re at it” with the spay.  Less anesthesia is good, and the pexy just seemed prudent.  We once adopted an English Mastiff (Chewbacca “Chewy”), who never had bloat problems but we always worried, and Sandee was very helpful with information and a favored vet.

While waiting for surgery day, we debated naming.  I didn’t like “Silver”, though I’m kinda reluctant to rename an 18-month-old dog, that’s still “puppy” age for a Dane, and with the other changes we decided it’d be OK.  I wanted to have a name related to 3.  “Tripod” was too obvious.Trey and Toika and MacBeth (witches), Magic (3-pointers), Triangle was 3 syllables but… Delta!  Triangular, easy to say… Jack suggested Delta Dawg, Helen Reddy and all the folks round Brownsville say she’s crazy, “Delta” came home with us in late February. 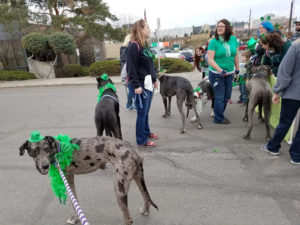 She really fit in from the beginning.  Delta and I marched in the St. Patrick’s Day parade, with the 3-legged Dane in the green derby and green feather boa attracting a lot of attention.  Dog park and back yard with Brutus – they’re really the best of buddies.  Brutus can’t outrun her with those long legs, though the only time she seems to miss the 4th is when she’s trying to stop or turn quickly – no problems with stairs or sitting, but “shake” or “5” is a bit too challenging.  She’d rather lay on the couch or in the cool grass anyway.  Kitt, Grandpa’s cat, has arrived at an arrangement with Delta.  If she’ll keep her big BIG nose out of his personal space, he won’t arch-up and hiss and slap her when she’s walking past.  Pepper, Preston’s cat, is mellow buddies with Delta, even likes being chased
around the patio sometimes.

As I noted, we’ve had lots of dogs, mostly big ones.  We’d met Wendy’s Danes and Jack’s, but didn’t really know the breed well.  I don’t know how we managed – Danes have so much character!  Delta is much more polite at taking tiny treats out of my fingers than Brutus is.  She has never been bad about “counter surfing” – after a couple of early incidents, she knows what’s Grandpa’s lunch and won’t go near even if left alone in the room with it for a few minutes.  She loves the couch, but will get OFF! and knows she’s not supposed to be on the living room one (unless nobody’s in the room or watching).  She loves to cuddle with Grandpa on the office couch, but has NO problem whining, nosing and finally barking if necessary when it gets close to
6:00 (of course she can tell time!) if Grandpa is too busy studying the insides of his eyelids.  She really does love the backyard summertime and chasing Mr. Squirrel along the hundred yards of 6′ cedar fence.  She’s pretty sure she can’t make it over the fence. I think she could- she’s got about a 30″ vertical leap, and way back then, Fritz the 150lb Rottweiler used to get over the fence when he first joined us, before I temporarily strung up an electric wire.. 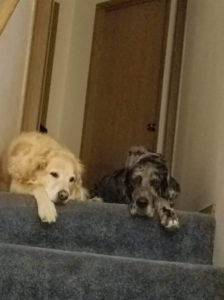 Delta doesn’t have great leash manners.  She’s hard to walk on the leash, because her tripod gait is all hoppy, and she’s not comfortable walking as slowly as I usually do.  We work on it – and she’s still enthusiastic about escaping out the front and going for a runabout. Much safer on our cul-de-sac than her puppyhood home, and she will come back when called… eventually.  She’ll wag that big ol’ happy tail and apologize. “Grandpa, I didn’t mean to make you late for work.
Love you!”   Great Dane, great dog.